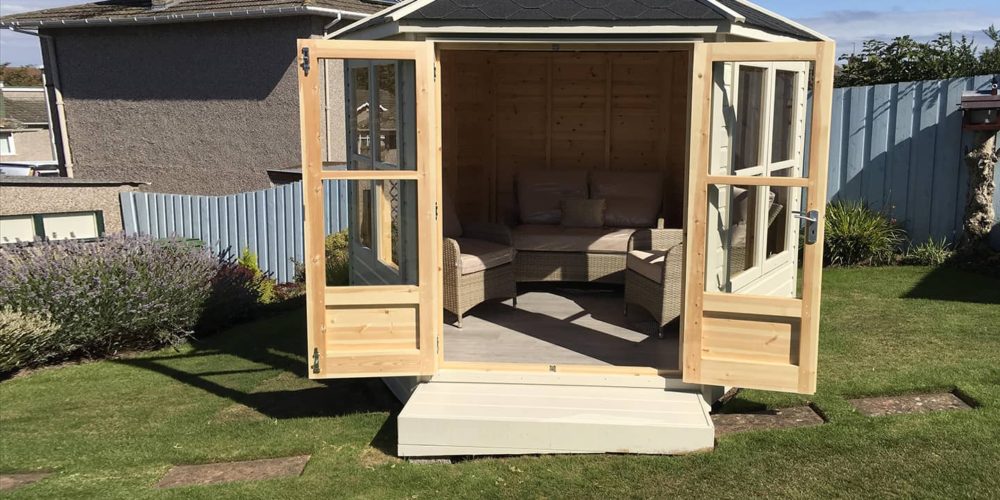 To create foundations for a Gillies & Mackay ‘Dunsinane’ summerhouse in an enclosed back garden, where access was restricted and could only be achieved through the garage.

The garden threw up a few challenges, the main one being that it’s on a slope. The initial proposal the customer received to alleviate the problem of the slope was to install railway sleepers, aggregate and concrete, taking up to two days. The costs were prohibitive to the homeowner and the upheaval to the garden was not something the customer was willing to contemplate. In collaboration with the team at Gillies & Mackay, No More Digging completed a pre-installation ground survey and provided a suitable layout to merge seamlessly with the summerhouse floor construction.

Nine 1200mm No More Digging foundation ground screws were installed and levelled to millimetre accuracy. This provided firm foundations for the summerhouse to be erected without any delay.

It’s an absolutely amazing process, with their screws installed in just 90 minutes, ready for the summerhouse to be built on top. The fact that there’s no mess from concrete and digging is clearly preferable to the alternative of railway sleepers and aggregate which was going to take two days!

The No More Digging team were also lovely – I watched it all happen from the kitchen window and they were in and out, with no hassle at all.

Choose ground screws for your next project and save time, money, and the environment.